Since it has been a while since I updated the ‘ol debt snapshot and totals, I thought having paid off the pickup would be a good a time as any to update things. So this is the year end as it stands.

So close to being 1/2 way to debt free. Already we are feeling so much less stressed about finances just having paid of what we have already. When we started 2008 we were still pretty wasteful even though we had paid some things off. Now things are much different.

So ’nuff said, here is the state of things now: 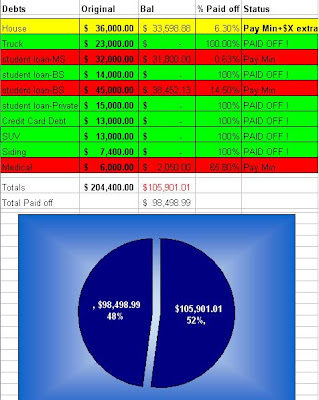 The pic is kind of icky looking, but if you click on it, it will open up normally. Basically we are at 48% paid off. All that remains now are the really big student loans, the mortgage and one medical bill to he hospital.

You will notice that now the house will be our next target, although we are waiting to see how this years income taxes come out before allocating the new budget and continuing on the debt snowball. This will probably be a slow target but since it’s our highest APR of what’s left, it deserves to die next. Now we own both vehicles, maybe some day we can also own our house.

Jaime is a married mom of 2 young & energetic boys. In 2008, she made the difficult decision to leave a job she loved to stay at home with the kids - but soon realized she loved being at home & helping others save money. Now she shares the hottest freebies, deals & cryptocurrency info at Coupons & Freebies Mom.
© 2022 Coupons and Freebies Mom, LLC
All Rights Reserved