Warning: My inner geek may bore you, LOL. I’ll try not to be overly technical.

As many of you know I am an engineer by trade, my disciplines are in both mechanical and electronics. I spend most of my days knee deep designing, developing and troubleshooting electrical systems, specifically in the lighting industry. One thing that I have seen many people talk about (and have had many emails about this myself) is whether it really saves electricity to turn off the lights when you leave the room, especially if you know you are coming back in a minute or even a couple minutes. Read: many people talk about it and speculate… but how many of them can prove it?

When I am cleaning house, I bounce around room to room like a chicken with my head cut off trying to pick things up, sometimes I leave the lights on merely for convenience… but still one has to wonder about the old wives tale that it uses less electricity to leave the lights on.

The train of thought that most people have is that when a light bulb (incandescent, florescent, CFL, neon, LED) is turned on, it draws more current when first powered up.

Is this true? Yes and no.
Allow me to explain. Some light sources do indeed draw more current when first powered on, this is technically known as inrush current. Incandescents are probably the worst for this. From experimenting, most modern CFL’s, florescents with electronic ballasts, neon and LED lighting does not have an inrush current (at least not measurable). Most modern CFL’s and electronic ballasts (florescent and neon) have a bit of a soft start involved, meaning in order to illuminate and complete the circuit it must ignite the gas into plasma. This is not an instantaneous process, so it is inherently slower starting.
So even in the worst case scenario, using incandescent lamps, we know that there is indeed an inrush current involved. But does this inrush current make it cheaper to leave the lights on for a minute while you grab the phone?
NO!!!!

Here’s proof: I took a 60W incandescent light bulb and monitored the current on my oscilloscope (an instrument that takes measurements vs time), here is the results. Notice the large spike of current when first powered on? This is the inrush current. Nominally this inrush current is about twice the steady state current. 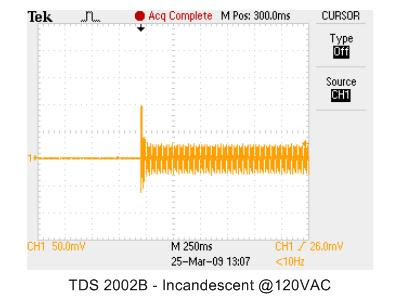 But notice how short the inrush current is? If we zoom in and measure this time you will understand. See that time on the side (delta t) 48.00ms. That’s 0.048 seconds. That means as long as you are out of the room for for more than about a 1/10 of a second, it does indeed save money to turn the lights OFF! 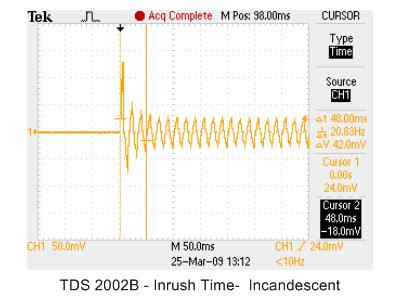 I don’t know about you guys, but I usually leave the room for more than .1 seconds at a time… Usually… LOL.

This is worst case scenario. What about best case? Best case, the most efficient lighting is LED’s. Here is the overshoot in LED lighting. NONE. Period. 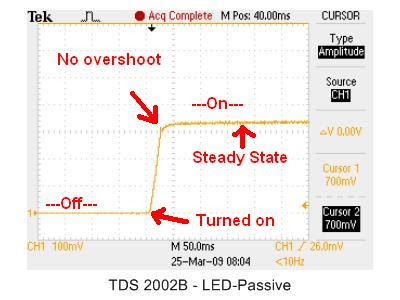 This means that it always saves money to turn them off when leaving the room, even when it is for 0.10 seconds.

Hope you found this informational. As a science dork, I just thought it would be fun to prove this myth either way.

Don’t forget to turn out the lights!!!

Jaime is a married mom of 2 young & energetic boys. A few years ago, she made the difficult decision to leave a job she loved to stay at home with the kids - but soon realized her TRUE passion was to be at home with her kiddos & helping others save money. Now she shares the hottest freebies, coupons & deals here at Coupons & Freebies Mom.
© 2018 Coupons and Freebies Mom, LLC
All Rights Reserved